We went to an opening featuring one of Jean’s pieces at the Museum of Arts and Design in New York. We got there a little late (straight from flight) and Jean went in to the museum to find out what we could do with our packs, etc. While I was outside the museum with all our stuff on the sidewalk, one of Jean’s friends took a fall in the doorway (thanks to an impatient person pushing past him). His hip was fractured in the fall/the shove.

Inside the museum it was a scene – lots of people, some of Jean’s colleagues, friends from Berkeley and San Francisco, artists, some people wearing art clothes, some people who’ve been around for awhile, like Fayette from the Cockettes (https://en.wikipedia.org/wiki/The_Cockettes). A nice time. I enjoyed seeing Jean’s work and other pieces, like Wavy Gravy’s jumpsuit, a dress by Gretchen Fetchen, and other “hippie couture.” (Who would have thought that there would be hippie couture – but there was and is.)
We met Jean’s sister, Susan, and her husband John at Eately for a good Italian swordfish lunch. It was wonderful to meet Susan and John.
Highlight: David and Charles came to NY for the opening and had a lovely champagne reception for Jean in their suite at the W Hotel. What an affirmation for Jean, for me, for our relationship (including the relationship between David and Jean; between all of us – Jean, David, Charles, me). It was a beautiful time!
Jean Cacicedo: art is not for judging – look – like – don’t like – no difference.

Jean and I walked for quite a ways in the city on a cold, cold day. Wonderful coffee shop at Highline Hotel, cold streets, a walkway where an El had been, so cold – “I’m so high!” “Life is too short to be anywhere but here.” On to Greenwich Village, walking along the 4th Street of Dylan’s Positively 4th Street. On to the Stonewall Inn where gay people took to the streets/rioted in the battle for liberation. On to Washington Square and NYU’s Grey Gallery featuring work from avant-garde artists and galleries from the 1950s and 60s. On to meet David and Charles back at the Stonewall Inn for a glass of wine and on to dinner at Chumly’s, an old speak-easy where Hemingway, Anais Nin, F. Scott and Zelda, Steinbeck, E.E. Cummings and a host of other writers hung out. We sat where Simone de Beauvoir sat.

We caught a cab back to the hotel. The driver was driving aggressively and hit another cab a glancing blow (NY, what an aggressive place). When the guy pulled over so he and the other driver could jaw at one another we all just got out and walked away. In a few minutes the guy drove up next to us, wanting money. We gave him the approximate fare and moved on.

From my notes: we made love in the morning and again at night, then lying in bed singing Van Morrison songs together. I held her and Jean cried for joy; we cried for joy.

More notes: at the Highline Hotel coffee shop I was suffused with gratitude – “This is the only way to live.” When I’m really old, read this to me. Remind me that I lived as fully as a person can live. I’ve loved and been loved by two incredible women (a warrior princess and a shaman princess – really). I’ve laid in warm beds and traveled the world and looked upon my son and practiced mercy and walked in misty gardens and run across the fields and made love in the meadow and danced in the sun and under the stars and so much more. I’ve lived and loved and been loved.

More notes: at the Grey Gallery there was a window full of post-it notes. Jean took a random photo and later when she enlarged the photo, here is what was in the center: “… the greatest of these is love.”

Saturday morning we packed, I went up to say goodbye to David, we took a taxi to the Port Authority, then bus 273 to Hoboken, and got off almost directly in front of Jean’s niece Anne’s women’s clothing store. Anne’s son, Arthur, and Jean and I walked down the street to a Cuban restaurant where we had a lot of food and fun. After lunch, Jean caught a bus back to the store and Arthur and I went to a grocery store, then started the trek back to Anne’s. It was 19 – 19! And we were freezing. I was carrying two bags of groceries, no gloves, and my coat wouldn’t stay buttoned. Nevertheless, we had a great time, laughing along the sidewalk and Arthur talking about his Dad.
Back at Anne’s store we went for another walk, this time to Anne’s home a few blocks away. Arthur took Jean and me up to Anne’s room on the third floor of her three story brownstone. Cool. We’re in Hoboken now! Then Beatrice, Anne’s 6 year old daughter, and Anne came home, and then Keith, Anne’s BF. Nice dinner, good times.

Sunday we had what I call “a Berkeley breakfast” of fruit, yogurt, and toast and nut butter. Then a great trip to the grocery store for Jean, Beatrice, and I to buy chicken for Jean to grill and supplies for me to make pear tarts.

When you hear the music
Ringing in your soul
And the feeling in your heart
Just grows and grows
And once again, I’m ready to die, complete.
I baked the tarts with frangipani – oh man, so good. I felt happy and homey with the children and baking and Jean and Anne and Keith. Jean grilled chicken and we fixed salad for another nice family dinner.
And I realized this was March 5, the second anniversary of Leslie’s passing. I thought it was 3/3 at the latest. Two years. Waves of sadness. Ahhh, Leslie, you’re always with me in my heart. You’re my reference. Anne said, “Are you okay?” “No.” I went up to our room and sat and felt and thought back on those last difficult, beautiful months and the beautiful years that went before.

In the morning we had breakfast and finished packing. Good Lord, how did our stuff get up the narrow staircase to the third floor! Walked back to Anne’s store, and Jean and Anne went somewhere while I took a nap on the couch. Lunch at the Cuban restaurant, Uber to airport, and we’re off to Barcelona.
—————-

From notes made a month or so ago
I looked for this book for a long time in the 1970s-1990s, but it still had not been published. A few evenings ago, we were in a small bookstore in Berkeley, and I asked the owner if she had any books by Jung. She said, “Yes. Would you like to see the Red Book?” “Yes(!!!)” And so she brought out this “reader’s edition” of the fabled Red Book (written between 1913-1930) – the basis of Carl Jung’s later works/his life’s work. Later she went into the back room and brought out a copy of the big original, complete with Jung’s paintings and drawings. Wow! 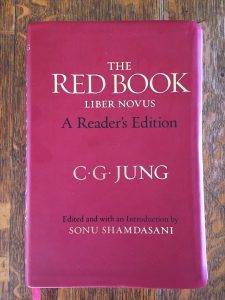 On the way from San Antonio to Austin (thanks Barbara, for the comfortable hospitality and fellowship!) to Dallas, we stopped in Waco to visit the Baylor campus for about an hour. Jean got a phone call from her sister and we stopped for her to talk. She sat on the grass to talk and I and I lay down beside her enjoying the sun and watching students and faculty walking by (I was on the Baylor faculty for 20 years). Later we realized that the whole time we were there we were the only people we saw sitting or lying on the lawn/commons. This, on a class day, on a warmish (50s-60s) spring day at a big university. My oh my.
Somewhere else, someone said, “I need to love: I need to be loved.”