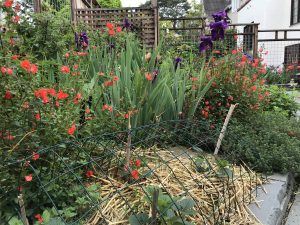 The first glimmer was long ago pictures of some New Zealand cottage gardens. Then the gardens at City of Hope Cancer Hospital near LA. And Mitta Angel’s front garden and riding around with David when he was learning to drive – in Old East Dallas, especially Hollywood Heights, seeing gardens in front of homes – cottage gardens… From my Cottage Garden page – put up in 2003. 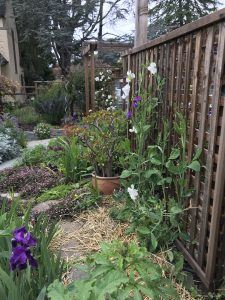 Now I’m in Berkeley, which must surely be the cottage garden (and hippie garden) capital of the universe! We took out the front garden to revision the front – including putting in a fence to keep the deer out. Now, in addition to the beautiful flowers that were here in the front garden before, there is a kitchen/herb garden in front. A pretty curving stone path starts at the arbor and splits to go to the kitchen door (the one everyone uses) and to the front door. No lawn – all flowers and herbs.

Herbs in the front (kitchen) garden: 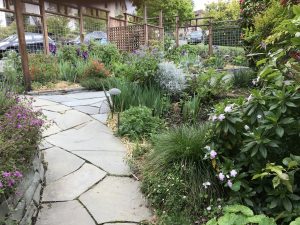 Going up path from kitchen steps 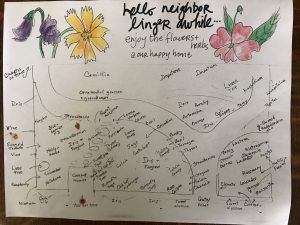 Map of the garden – posted on corral gate

Other good things in front include about 25 ever-bearing strawberries (Seascape and a few other strains). We have two blueberry bushes, which will give a few berries this year. Lemon tree. Lime tree. Garlic is coming up. Raspberries look strong. We put in one Sungold tomato in front. I planted cantaloupes (Ambrosia) and cucumbers yesterday.

I’m excited that this year is the first time I’ve ever grown sweet peas and foxglove. One of the sweet peas is blooming, 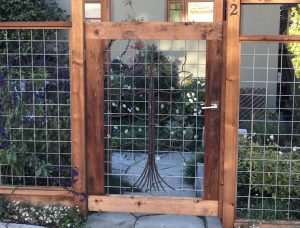 but I think the ones I planted from seed will need another 3-4 weeks to bloom. 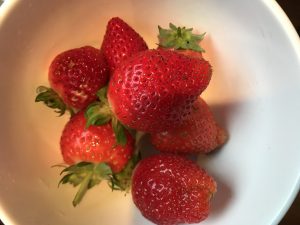 And so the garden grows. Baked chocolate chunk cookies yesterday. Gave some to the people across the street. A few weeks ago we got a bale of straw for the strawberries (to keep the berries off the dirt so they won’t rot as they ripen). Now we seem to be growing a fine crop of hay alongside the strawberries.

…into Wyoming, highway up and down and around in rolling high arid steppe – lots of sage, scattered livestock, a few herds of antelope, into a fertile river valley with green fields, herds of livestock, the majestic mountains in the near distance, the Snowy Range coming into view, coming closer to Centennial, where Jean came deeper into herself.

What does it mean to be with a woman like you – who opens me to my tears – who opens me to deep awe and joy. Driving across the Wyoming high country, across the BIG SKY country feeling as if we’d taken something psychedelic – so high and so good. “It’s good to have been high before, because now we know what’s happening now.”
The dream is reality.

You told me I help open places in you – as you help open places in me.
That song you sang – “Wy-Wy-WY-oming.”
We stayed with Helen in Golden and with Kenny and Diane in Silverthorne. Good shopping trip with Kenny. Wonderful hospitality from nice people. Colorado and into Wyoming after a stop at Cataract Lake.

Centennial, Wyoming. Population 270. Jean called the woman who bought her house 40 years ago to see if we could come by and walk past the house to the river. The woman told Jean that she was out of town, but the back door was unlocked, so we could just come on in. And we did. And we walked the 30-40 feet from the back door to the river running fast (we heard a big fish break water). Standing there in the cold rain in this place of tremendous growth for Jean.

We spent the night at the Old Corral Hotel, Peet’s coffee and fruit and yogurt for breakfast in our room.

The highway (opened yesterday) up out of Centennial into the Snowy Mountains. I first saw these beautiful mountains about 1963 off in the distance on the way to somewhere in Wyoming with my friend, Renn Fenton***. I’ve seen them in the distance 5 or 6 times since; and now, driving into the mountains through pine trees dusted with snow and a little snow on the ground, now more, stopping the car down a smaller side road and getting out to be in the snow surrounded by trees with the snow too deep to walk in. Driving up and up with deep drifts on the side of the road and the snow coming down and at the top of the pass the snow is coming down sideways, stinging our faces – Yes!

The endless arching of this endless summer from Berkeley to Mendocino to Dallas to Santa Cruz to San Francisco to Vancouver to the golden afternoon of Big Sur to Marcia’s house to Indian Rock to The Temple to Flagging to the Edge of the World, to Yosemite (walking with faeries in the forest) to the beach the seashore the waterfront to La Honda to Esalen(!) to massage class to New York to Spain to our beautiful life in Berkeley to Colorado into Wyoming into the place where Jean became so much and arching across the beautiful Snowy Range! This isthe train. Here is a moment on a Mendocino beach that captures when the endless summer started.

Driving out of the Snowy Range it was a short drive to Saratoga, to visit the hot springs there. The Saratoga Hot Springs hotel was overpriced and the restaurant mediocre, but we had a great time along the river and in the room. (More later on the municipal hot springs – a much better option than the “resort.”)

From Saratoga, we drove north – first to Medicine Bow for breakfast with bikers (and not 50 year old divorced guy “bikers” with do-rags) – and onward to the Sheridan area to visit Jean’s friends, Katie and Hal for a few days. We hung out on their ranch, then drove up into the hills, parked, and walked along a dirt road lined with lupines. Hal forged ahead with the dogs (Dan and Marty) and Katie and Jean walked through the lupines and I wandered along in my own world. Lunch was at a café in Bighorn. After lunch we went to a “roping” – a cowboy Memorial Day get-together and a birthday party and so there we were, standing along the corral fence with the “headers” and “heelers” roping the steers and the other people sitting on their horses and a few along the fence.

And THEN, it was time for the “boil” – a huge pot of boiling seasoned water, with potatoes, sausage, corn, and shrimp – plus bread and slaw and macaroni salad and watermelon and rhubarb (harvested yesterday) pie and coconut cream pie and a humongous tub of ice cream and nice people – though most are probably farther to the right than I am to the left.
A great Memorial Day.
From Sheridan we headed south to Thermopolis for a short time in their municipal hot springs, then on to Lander (home of the National Outdoor Leadership School – NOLS). Good times and good food in this pretty Wyoming town.
We drove the few miles from Lander to Sinks Canyon where we camped in a state park. This was Jean’s first night in a tent in 40 years. Very windy and rained for awhile – a great night.
(“Grief is the final act of love, and recovery from it is the necessary betrayal on which the future depends. There is only this one life, and we are the ones who are here to live it.” From NYT review of Option B: Facing Adversity, Building Resilience, and Finding Joy by Sheryl Sandberg and Adam Grant.)

We talk of our spouses and the terrible grief. Driving up the highway across the Wyoming steppe and through the mountains, singing Grateful Dead and Beatles songs together – Here Comes the Sun! Such an emotional trip. Tears just beneath the surface… Attics of My Life – not about a person as much as self… attics = past – I laughed with delight.

Onward back across this magnificent big sky country to Saratoga, where we stayed in Hacienda motel on the edge of this small town and drove five minutes to the municipal hot springs – free, sandy bottom, convivial scene. Back at the cowboy motel we rested then went to the Wolf Hotel for a prime rib dinner.

Continuing south we again camped, this time in the Vedauwoo area – we had a great campsite among the hoodoos. Our nearest neighbors were a hippie family on their way to the Rainbow Gathering in a great bus. The man and I were talking about an Incredible String Band song quote on the side of bus (“We love you, but Jesus loves you the best”) and he and I sang a few lines together. Later I recalled that I sang that song to Keo as she was dying last January.

Camping with Jean was great. We were comfortable in our warm sleeping bag and tent, enjoyed our camping food, and had good times hiking around and watching sunsets.
From the Vedauwoos we drove to Fort Collins to spend the night, but it was too cityish, so we drove into the mountains and rented a cabin along the Fall River in Estes Park. This was a great move – clean mountain air, rushing river, and… a bear walked by less than 20 yards from Jean!!! This happened a day after we talked about our spirit animals (mountain lion for me; bear for Jean)!

In the morning we took off up Trail Ridge Road across the Rockies. It’s been more than 50 years since I was there and Jean had never made it across that pass at 12,183 feet. Wow! Surrounded by tundra and snowy peaks and the thin air and clear skies. Now over the pass toward Winter Park and then Golden to spend the night at Helen’s (and her dogs, Louie and Stella).

Jean and Helen were talking about a car we saw with a bumper sticker – Women for Trump. Jean said, “Don’t they realize their bodies are sacred.”
Denver airport and flying from one paradise (Wyoming/Colorado) to another (Berkeley/Bay Area).

*** Renn Fenton and I lived together in a cabin in Estes Park and climbed in Estes and the Needles in South Dakota. While Jean and I were traveling in Wyoming and Colorado, I told her a little about Renn. When we got home I googled him. I discovered that he died in 2007. Here is something from an internet forum: “I am a travel nurse who has taken care of Renn while he was in the hospital. I wanted all of you to know that I have felt privileged to be one who got to spend time caring for Renn during his last days. It was clear to me the first time I laid eyes on Renn that he was quite a character – when I googled him, I found this site and saw a comment that made me want to respond. I was actually able to “break through” with Renn and get him to talk back to me and say my name. I will forever remember his vivid blue eyes and “cat that got the canary” smile. I just wanted all of his friends to know that there are several of his nurses who have appreciated Renn for being the kind of person who makes this world interesting and feel honored to have cared for your friend.”