Dedicated to Charles Bukowski and his biographer, Neeli Cherkovski for their inspiration.

Opening into a concrete courtyard
surrounded by apartment doors
Upstairs a woman insane from
Alcohol
Saying to me, “help me, mister” in her
Cracked raspy drunken voice and I 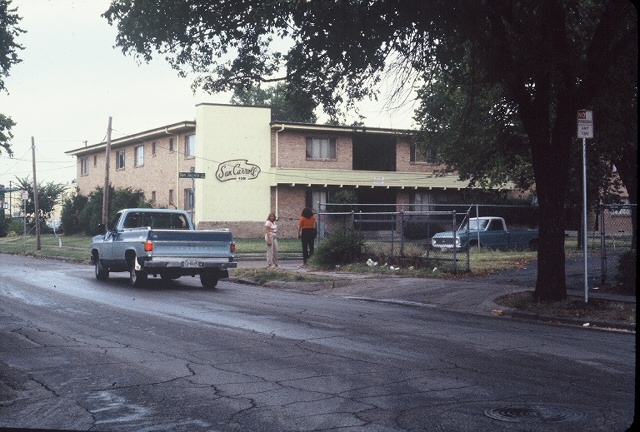 Want to party? They would say.

Two apartments were joined
In a way that meant there was no exit
From part of the apartment
Of course there was a fire
Of course there was a girl
Who died in a windowless room in the fire
I have a candle that
Was given to me at the Novena for Esmeralda.
Her older sister was a gangster who used to flirt with me
(she was really hot and I would get flustered)
No more of that

Two former prostitutes lived with a teenage girl
Who had seizures almost every day
She was on a lot of phenobarbital and other drugs.
The women liked to fix me things to eat
Once they gave me blood soup
The smell of blood was with me all day.
They married the girl to a truck-driver when he was in town
They’d fuck all the time
The girl having seizures I guess.
They would stagger out of the bedroom, sweaty,
Her hair in her face, her mouth open, and her eyes in the
“Repetitive side to side movements” of nystagmus.

I knocked on a door.
You know how you can sense that
Someone is there but there was no answer
A curtain moved and I knocked again.
Finally the door opened and
There was a woman standing there
Disheveled, maybe a little confused
She stood aside and I went into her one bedroom apartment and
So began a two year journey ending in
Death.

The apartment smelled of beer and musty and old
Her oldest son slept on the floor
Before he was sent to
Prison for armed robbery.
There was another son, this one with Down’s syndrome, and
There was a 12 year-old daughter.
The woman had cancer.
I spent hours, days with her in her apartment and the gyn-onc clinic at the county hospital.
Her daughter, some other people, and I took care of the woman.
The daughter was soft-spoken, sweet.
I loved her and tried to take care of her, too. Her photograph is on my wall.
The woman was a heavy drinker, but
I didn’t realize it at the time.

She would lie there on an old stained two-cushion “love seat”
In the musty small living room
With stained old carpet, beige, of course.
I think she had once been a beautiful woman, but
Those days were gone, ground down by poverty
loss grief alcohol war displacement illness.
During those two years she seemed vacant most of the time.
Once I saw someone kneel beside her and
Pray and though the woman didn’t understand the words,
She heard the language, the meaning of the words and
Then was the only time I saw her show emotion, a few tears.

I walked into the apartment
On the morning of her death
Curled up on that love seat.
She took a last breath and
That was it.
Her daughter and I moved her to a blanket on the floor and
Washed her wasted body
With help from a girl who lived downstairs who
Was a tough kid and who said
We should put something nice on her.
So we dressed her in a clean pink t-shirt and
A flowered sarong.
Ready for pick-up.

A woman I’d seen around
Invited me into her apartment.
In the living room there was a couch,
No tables chairs TV.
She brought me a Pepsi and
Sat down beside me, close up against me.
It felt good, she smelled good, she looked good.
She smiled at me and let me know we could fuck if I wanted.
I did want, but
That’s not where I was at at the time.

Two teenage girls were in an empty apartment
Hiding from their father, who
Of course
Abused them sexually.
Blankets in a pile in a corner where they slept
We helped them move to an apartment on Gaston Avenue.
One of the girls ended up in the penitentiary
The other worked at McDonalds,
Frying fries, wrapping burgers.
Trying.