Clearing out a drawer
I found a few photographs.
There were some good ones
And I stuck them in my suitcase.

Among them were photos of Leslie, Pov Lon, David, and Keo on the front porch; my Mom/Grandmother Mary and David in our kitchen; Leslie and Baby David; and David and his siblings.

I looked at these pictures of life and I realized I’d helped take care of four of those people in the last days of their lives. My Mom, Leslie, Keo, Phana. What sadness. But I’m glad there were not more than those four. Here they are with some of the photographs.

Photo: Leslie, Pov Lon holding David, Keo on the front porch (Keo and Lon had been in a war, concentration camps, and refugee camps until about two months before this photo was taken) 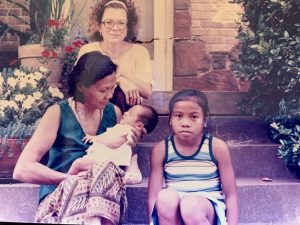 When she was first diagnosed with small cell cancer of the lung I worked to understand the natural history of that disease. I mapped the likely metastatic pathways of her specific tumor type and the manifestations of metastases so that I could be sure to prevent or treat early any resulting problems (like hypercalcemia or spinal cord compression) or at least understand those problems. That became the basis of a book on end-of-life care in which I mapped the 18 most lethal tumors and associated problems.

A month or so before she passed, my Mom and I journeyed together. Among the things that happened that day (What a day!) was that she forgave herself. After that her pain lessened and her suffering was much less 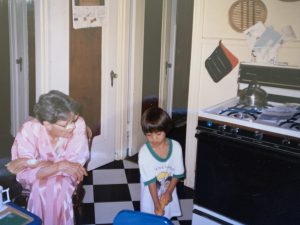 – all the way through to the end of her life.

How my Mom died: http://ckjournal.com/how-my-mom-died

Photo: David showing his Grandmother how to play golf

Leslie and I were together for nearly all of the years since we were 16. She died in my arms at Baylor Medical Center.

In Leslie’s last month I would read to her when we were in bed – first from my blog (the traveling parts), and when that became too difficult for her to track, I would read from Little Golden Books and similar books I had stored in David’s closet. I realized that everything I read was related to going home, finding a safe place, and the like. Books I read to my sweet Leslie included:

Once when I was in David’s closet looking for another book to read to Leslie I saw a book titled, These Happy Golden Years. I burst into tears.

From my journal: Dying is often not easy. These were hard times for her. She underwent profound changes starting at almost exactly 6pm that last (Thursday) night. She went to surgery about 1:30am Friday morning and she passed away back in her room surrounded by pure love about 4:30am. (I’m actually not clear on times, and maybe even days.) I was with her, embracing her, whispering words of love, of remembrance, people she loved, people who loved her, the Song of Ruth…

We are fulfilled. Nothing is undone between us. We have loved and been loved, lived our beliefs, had a happy home, had a beautiful son, had a grand partnership with one another, had many adventures, and so much more—really 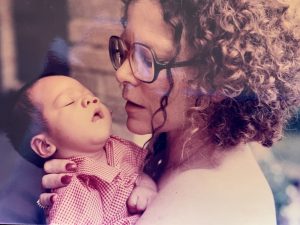 Keo I’d known since she was about 10, when she and her Grandmother lived with us for a few months in 1985. When she became so sick with cancer I went every day to Keo’s apartment. It was a hard time. Keo was ready to die, but nobody in her family was ready for her to go. She begged to die. I spent time with her and her husband and mother on her last day. She was 39 when she died. A few days before her passing I sang this song to Keo:

We’ll understand it better in the sweet bye and bye
(All will be One, all will be One)
You won’t need to worry and you won’t have to cry
Over in the old golden land.

Phana (David’s sister) I’d known since she was four. She was 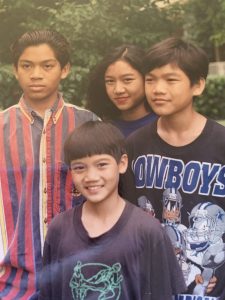 in her 30s when she passed. I took her to chemotherapy almost every week in Dallas and in Houston, to other appointments, and we hung out with David, Charles, and John in San Francisco. We spent many hours together in the car, infusion room, and elsewhere. We shared a lot. When she was close to dying, I thanked her for helping me through my grief from Leslie’s passing. Phana understood immediately. She died right around Christmas while I was in Berkeley.

Photo: David, Chhouen, Phana, Soda in front of our house

Once John and Phana and I were at the corner of Judah and 9th) in San Francisco and Phana was vomiting in the gutter. In just moments a young woman from a clothing store across the street came over with a bottle of water. After Phana passed, I went to that store and thanked the woman. I’m still thankful for her

“I’ll try to be around and about.
But if I’m not,
Then you know that I’m behind your eyelids,
And I’ll meet you there.”