In the morning I went out back to check on Mom. We talked for a few minutes and I fixed her a cup of coffee and washed some dishes. I went back home to straighten up before her radiation therapy appointment. 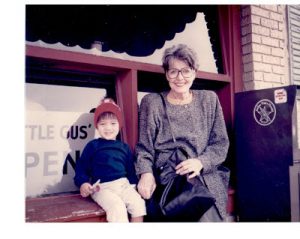 David and Mom at Little Gus’, where we had breakfast most weekends

When I came back, she was sitting on the two step ladder that I had given to Leslie 17-18 years ago) putting on her makeup. I thought, “Oh Lord, I don’t believe this as shaky as she is.” I didn’t say anything to her; just made a mental note to move a chair into the bathroom.

The truck was backed into the drive to make it easier for Mom to enter. I helped her walk to the truck.    Along the way she pointed with her cane to plants she had planted and some she had sprayed last week with soapy water for insects. She thought the hostas were doing better. She held my hand tightly.

We drove to Baylor and I think it was on this day she finally spotted the street woman I always watch for on Columbia.

She saw Dr. Senzer who did not indicate great concern for her condition, i.e., he didn’t realize she was as close to death as she was. At that time she was having increased right chest and back pain; weakness in her legs (reflexes seemed diminished to me); and some return of left hemiparesis. Pat Henderson, the nurse, gave her some IM demerol so she could tolerate lying still for chest x-rays. We went up to x-ray and back downstairs for treatment.    Then we left.

We got home about 12:45.  She walked, with help, from the car to her house. I got her into a blue gown- the one she chose, and into bed.   She was groggy and uncomfortable. I gave her two percocets.     We did quite a bit of pillow adjusting before she went to sleep. In the meantime, Betty Edge arrived. 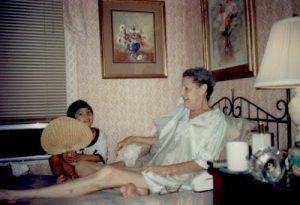 David and Mom In her bedroom. Her hair had begun growing back in

Betty stayed with her and I went home to accomplish very little. I checked on her three times before I left about 3:00. She was asleep, or semi-comatose or partially conscious propped high on 4-5 pillows each time I came by. I went to the cleaners, Wolfe’s Nursery (to get Mom the birdbath she had asked for), and to pick up David. When I got home about 4:15 her condition had begun to deteriorate. She had increased pain in her chest and back and was coughing up blood every 5-10 minutes. She was breathing 24-26 times per minute and her pulse was 114-120 and somewhat weak. Mom was not completely alert, but was rational and responsive to questions. Faye Briggs was there and had called a doctor. Faye said the doctor told her the blood was a result of radiation and capillaries being close to the surface of Mom’s esophagus.

Betty asked Mom if she could stay and Mom said, “Yes, I need you tonight.” Tom and John arrived and helped with the coughing. Faye left.

The radiation and capillaries theory didn’t seem likely to me. There was more blood than that. I talked with Dr. Orr who offered the option of having Mom brought to the hospital for bronchoscopy and possibly stemming bleeding, temporarily.   By now it was obvious that she was dying and I declined the offer.  Despite the doctor knowing about the increased pain, he did not offer or suggest any change in medication, hence It was necessary to directly request stronger medication. Tom had gone for Kleenex and John went to pick up the morphine. Betty, Leslie, David and I stayed with Mom.   We gave her some of David’s Tylenol with codiene for her cough.

Most of that time she sat up or propped on her right side. She coughed at about the same rate as before. We would help her sit up each time and she would hold the kleenex. Then we would wipe her lips and give her a drink to help get the taste of blood out of her mouth.

Leslie told David that Grandmother Mary was more sick now than ever before. She asked him if he understood and he said “yes.” Then Leslie asked if he had any questions and he said “no.”

After he came in to say hello, David went home and got Mom a straw.  Then he held the glass and straw for Mom to drink. Later he helped wipe her lips and rubbed her legs. 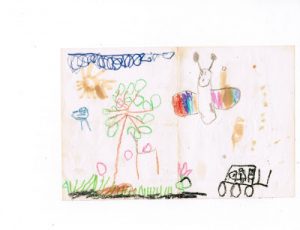 The card David made for her

He made a card for her and left it and a picture of himself (holding the sword he got at the circus) propped by her lamp. He also brought in some flowers from the garden and put them on her bedside table.

John and Tom were back and we gave her some morphine. She rested easy after a short time; and Betty, Tom, and I went home. John stayed on and we set up the intercom between the two houses. Mom lay either propped up on her back or on her right side. John was able to rouse her enough to give her medicines on schedule, but otherwise, she stayed semi­ conscious. Her coughing had lessened markedly. We kept a little vaseline on her lips and gave her small sips of water. She had no complaints except when changing position.

I could not sleep and went back and forth between the houses several times. John said that I came over every time Mom woke up. Although we were not saying, “Mom is dying now,” it seems like we were all fully aware of what was happening.         I thought she would make it through the night. I had a feeling of dread and could not sleep at all. About 12:30 John beeped on the intercom and I went back quickly.

John was holding Mom up trying to give her medicine. She wouldn’t take it and we eased her back down. We held her gently, John at her side, and I holding her head.  There was a change in her pattern of breathing and she opened and closed her mouth several times. I said, “Mom, we love you.” She stopped breathing. John asked if she was alive, and I said, “not very.” She died. We put a towel under her and just sat, numb, for awhile.

We called Tom but waited about 30 minutes before calling the doctor. The doctor called the Medical Examiner and they called the fire department and police. By now it was raining hard.     I went out to stand on the porch to await their arrival. About four firemen came to stand around saying and doing nothing and looking bored.  To me, they were intrusive and dumb.  The senior fireman filled out a report and they left. The police came and filled out their report. They seemed to have a greater sense than the firemen of what was going on this house where our Mother had just died.

Somehow, we bought into the process of getting this situation taken care of – forms filled out, cleaned up, body out, finished. We called the medical school and they dispatched a hearse. Tom came. Before the hearse came I went in to wake Leslie. She came out to Mom’s house (stagger ing numb/sleepy). When I told her that the hearse was on the way and asked what were we to do about David, she made a disapproving “mmrnm” sound.

That was all I needed to hear and went straightway out to meet the hearse and told them we had changed our minds and they couldn’t take Mom until later. After that, there was a calmness about. Leslie went back home to wait for David to awaken. John started calling people who might want to see Mom’s body before they took it to the medical school. We arranged Mom’s body and pulled a sheet up to her chest.

David got up about five o’clock and immediately noticed that Mom’s lights were on and people were there. He asked Leslie about it and she called me home. We all sat on the bed for awhile and then Leslie told him that Grandmother Mary had died. He cried quietly for about ten minutes. During that time he moved back and forth several times from my lap to Leslie’s. We all cried.

We went out to Morn’s and David looked at her closely, and then he sat on my lap on the love seat in her room. He asked a lot of questions about what had happened and I answered them the best I could. Suzie Miller and Betty Edge came, and later Eloise and CB.

There was great sadness that morning. David brought a picture of himself out to send with Mom. David also told Tom that he could give Mom a flower, “even if she’s dead.”

This was not an “end to her suffering.” She had little suffering, and most of that was from her mind rather than the cancer. This was the end of her life. She did not want to die. And her death certainly came before we were ready.

But it was a very good death.

Mom had primary tumors in her lung, and metastatic sites in her lymph, spine, and brain- that we know of. There were many terrible potential ways this could have gone. I think a lot of people don’t realize how incredibly lucky she was to die like this at this time. 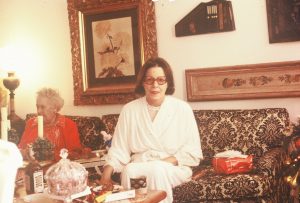 Aunt Dinah and Mom at Christmas

We are grateful for: Mary Kemp as a person, mother, mother-in-law, grandmother, and friend; her presence; the last two years of Mom living with us; all the time we spent together; Leslie taking care of her insurance and financial affairs; her friends; the garden; her last weekend (a very good one); the knowledge and confidence that kept her home to die with her family; her knowing throughout, from diagnosis to death, that we would be there for her and would do the right thing; being able to slow the after-death process; being able to grieve as a family; and much more.

We miss her more than can be said here. There is still so much sadness.