Warning: Boring Alert (but there’s a pandemic going on, so your calendar may not be full).

This is a short story of a van. 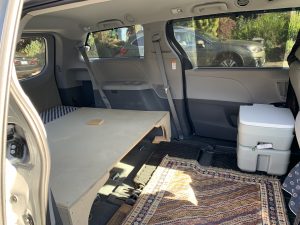 I’ve been in Berkeley five years now and because of a stellar public transportation system and Jean’s sharing nature, haven’t needed a car. However, except as a necessity, buses and trains aren’t at all a good idea these days. So I got a California DL and a 2020 Toyota Sienna van. In more or less order:

Get van. Get three part folding mattress that fits cargo space when second and third row seats are removed. 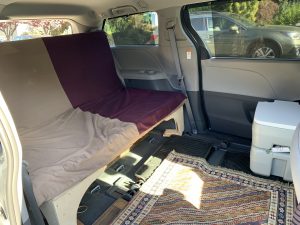 Take out second and third row seats. The third row seats can fold down inside a cavity in the van, but I took them all the way out to get extra storage. A difference between 2020 Siennas vs. 2021 is that in the latter the second row seats don’t come out because of airbag placement. 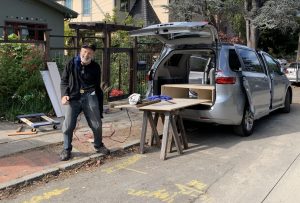 Caught by Jean, tangled up in a fleece

Build a sleeping platform with storage underneath. Someone had given me some nice ¾” cabinet grade plywood, and I collect scrap lumber, including some nice redwood. I built a sleeper/couch/storage platform designed to accommodate 12” high storage boxes. One nap showed us this was too high and our travel plans have changed, so I changed parts of the sleeper to give us 8” high storage space and enough headroom to sit on the “couch” or sit up on the bed when the couch becomes the bed. The floor is weird and lumpy from some hardware that is impossible for me to remove. I’ve leveled the floor some and Jean donated a small Turkish rug, but the floor is still a little lumpy.

Make curtains – Jean used some Indonesian ikat for curtains between front seats and sleeping, etc. area. We got precut light blocking panels for other windows for complete privacy when we want it. Just the thing for stealth cam

ping. Candy pointed out that we should have a God’s eye. She’s right.

We don’t currently plan on doing much cooking. I have a Jetboil water heater that I used backpacking. It quickly boils 2 cups of water, which is enough to make two cups of strong coffee or two servings of oatmeal with fresh or dried fruit or two freezer bag meals. http://ckjournal.com/backpacking-food

Get portable chemical toilet and put it in. Will use bungee cord to secure it when traveling. We don’t expect to travel any four-wheel type roads, so sloshing shouldn’t be an issue. Brand is Serene Life. 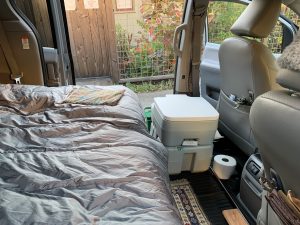 to some friend’s place near La Honda. But right now California is locked down pretty tight because of covid, so it will be a few weeks before we can go.

Vehicles of mine I’ve slept multiple nights in: 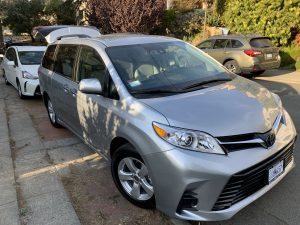 The VW van was a true magic bus. We didn’t need much storage space because we didn’t have much to store. Had a mosquito net big enough that I just draped the whole thing. Another night near Hippie Hollow, our little ghost town in Nevada, Oklahoma while terrible tornados whirred and buzzed and roared all around…

The Campry was a Toyota Camry with the back seat partially removed so I could put my legs through a hole into the trunk and thus sleep lying down, not the most comfortable bed, but fine for a night at a trailhead, in RMNP, Weminuche Wilderness, Wind River Mountains …

… and here I sit, in my Campry, dry and warm as can be. It rained all night and I was cozy and semi-comfortable. http://ckjournal.com/wind-rivers-2009-north 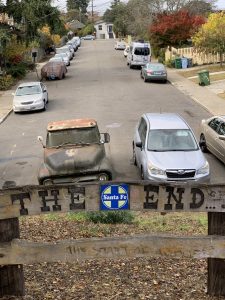 The RAV4 was a cozy home for me sleeping at Keo’s hospital, Jeff’s land, Jim’s lake house, Bryce’s ranch, and psytrance gatherings in Texas and Oklahoma.