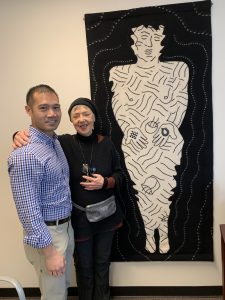 In the afternoon, taking a short nap, then lying spooning, tangled up together for I don’t know how long – 20-30 minutes, warm, so comfortable, comfortable physically, emotionally, puppies, lovers, friends, the afternoon sun starting to come in the doors, crystals sparkling, alive, rainbows on the walls and our bodies, knowing that literally this is as good as it gets, grateful. Remembering and writing this is as close as I can come to preserving the magic.

The Dreamer photo was taken in David’s office at UC Berkeley. Jean gave him The Dreamer. When we put it up, she explained some of how and why she made it. It’s felted wool. All of the lines on the body and face were sewn in and everything was shrunk.

Another day, kind of cold, taking a nap. Under the covers I encircled your warm, soft right thigh with both hands and we fell asleep like that… and awoke 20 minutes later – like that. This too, is as good as it gets. 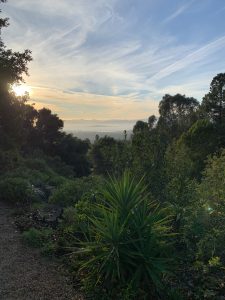 The Chancellor’s Garden – in the Berkeley Hills

Going through flyers and things related to events I’ve attended (mostly psychedelic forest gatherings) I ran across this from an Each Moment Matters event:

Of course it’s not one or the other; it’s both, in varying degrees. But there is movement toward more good days than bad. And now, five years later, the days are all good. I think of Leslie a number of times every day. Her presence is like an overlay to my life and I think of her more in brief moments than in endless sad ruminations; more in gratitude for her presence in the world and in David’s and my life. More in being inspired by her. Just the love. Not the awful pain.

I told my doctor that when I was getting up four times a night to pee, it was okay, because I’m happy, including when walking in the hall (“with hangings rich of many strange design”) on the way to the bathroom. But five times is too much. 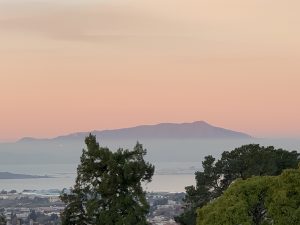 We were talkingabout being with a friend with ALS – a friend who is moving inexorably toward the end of life, who is unable to speak; but who can use her eyes with a computer to spell out messages. What do you say when there is nothing left to say? This specific question emerged:

What matters to you now? 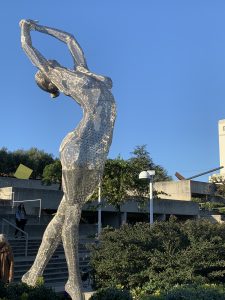 And it’s a question for us all, all the time. What matters now? Jean asked her friend this question. Love was right there at the top.

We see that personal growth can be part of the process of dying; that values clarification has value until the end; that the human spirit turns toward the light – toward love.

Jean’s sister, Ginny and brother-in-law, Jim were here for a couple of days. They had flown from Tucson to Chicago, then caught the California Zephyr (Amtrak) to Denver, through the Rockies, across Utah, through the Sierras (all of this in deep winter), and on into Oakland. From Oakland (Emeryville) they’ll take the Coast Starlight to Los Angeles and from there, the Sunset Limited to Tucson. Pretty cool! 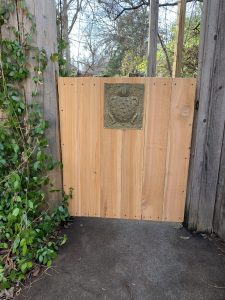 Back gate I made for Dallas house

Years ago, Jim’s doctor in New Jersey told him he had to quit smoking or die. So he flew to the west coast and rode his bicycle back to the east coast and by the time he got to the Atlantic Ocean, he had truly quit tobacco. Epic.

I was looking at Ginny and Jim’s New Zealand cycling blog: 59 days, north to south, 30 nights in a tent, seashores, up hill and down dale. More epicness. This man understands epic journeys.

So I was thinking about epic journeys in life. It’s worth thinking about. Some of my epic journeys are 13 months of combat, the hippie years, taking care of Leslie at the end of her life, a 10 day solo trek into the Wind Rivers wilderness, and other journeys across geography and mind/heart. 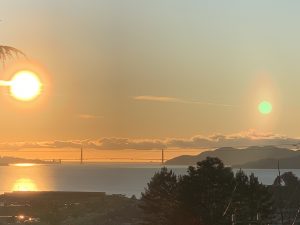 In 1988, when I was operating community health programs out of the East Dallas Police Storefront, a police officer was murdered in downtown Dallas. John Chase was shot three times by a homeless man who had grabbed John’s pistol. John pled for his life while a crowd was urging the man to shoot: “Kill him!” they were shouting. “Kill that white mother-fucker.” I had only met John once, but the killing hit me hard because he was a nice guy and because nobody tried to stop the killer. Afterward I made a clear commitment that I would never let something like that happen in my presence, regardless of the risks. I’m older now, and not much of a badass, but here it is again: the same commitment to the memory of John Chase.

As with all other murders, John was autopsied. His partner, Gilbert was there for the entire procedure. Gilbert is a true warrior.

Can you see how this blog functions as a kind of memoryizer (new word meaning promotes remembering)? I guess it’s a way of keeping my shit together, as we used to say. 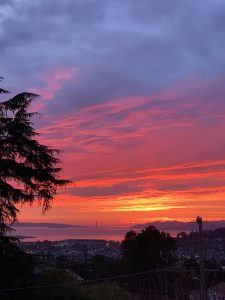 Sunset from the deck. NOT Photoshopped

My high school class (1962) has a Facebook page. 20-25% of the class is on that page. It’s nice. Everyone on the page is about 75 years old. There are all kinds of realities associated with that age. In a recent discussion three people noted that they are homebound. Death is near for most of us and not far for the rest. I recently posted on that FB page:

These are truly the years of living dangerously. A classmate’s recent listing of classmates who have passed (about 20% of us) was such a powerful document. And here we are, still living after all these years! We’re all kind of like people living with cancer (and some actually are) – each day, each moment, each touch, each kind or loving word… Treasures. Here’s to each one of us, here and not here.